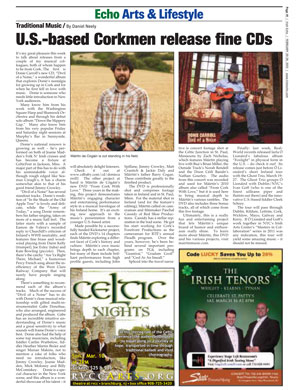 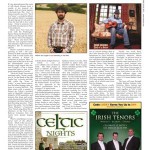 Dan Neely’s write up in the Irish Echo

Dan Neely of the Irish Echo reviewed Máirtín’s new DVD travelogue in the Feb 2013 issue, alongside the great Donie Carroll’s second recording, ‘Divil of a Noise’ (up Cork!). Both reviews are available in print or in this PDF.

Three years in the making, this project demonstrates Máirtín’s engaging character and entertaining performance style in a musical travelogue of his Ireland home. It’s an exciting new approach to the music’s presentation from a younger U.S.-based artist.

Made possible by a successfully funded Kickstarter project, each of the DVD’s 14 chapters finds Máirtín exploring a different facet of Cork’s history and culture. Máirtín’s own music brings depth to each chapter, but many of them include brilliant performances from high profile guests, including John Spillane, Jimmy Crowley, Matt Cranitch & Jackie Daly and Máirtín’s father Barry Cogan. These contribute greatly to the finished product.

The DVD is professionally shot and comprises footage taken in Ireland and in St. Paul, Minn. For the material shot in Ireland (and for the feature’s editing), Máirtín called on cameraman and filmmaker Paschal Cassidy of Red Shoe Productions. Cassidy has a stellar reputation in the trad scene. He got his start working for Cork’s Forefront Productions as the cameraman for RTÉ’s annual Fleadh program. Over the years, however, he’s been behind several important programs on TG4, including “Geantraí,” “Gradam Ceoil” and “Ceol Ar An Imeall.”

Spliced into the travel narrative is concert footage shot at the Celtic Junction in St. Paul, Minnesota by Zach Nicholas, which features Máirtín playing live with Bua’s Brian Miller, the Outside Track’s Norah Rendell and the Doon Céilí Bandn’s Nathan Gourley. The audio from this concert was recorded and used for Máirtín’s 2010 album also called “From Cork With Love,” but it is used here to bring musical depth to Máirtín’s various rambles. The DVD also includes three bonus tracks, all of which come from this live footage.

Ultimately, this is a really fun and entertaining project that lets Máirtín’s unique brand of humor and enthusiasm really shine.