A Page about music projects 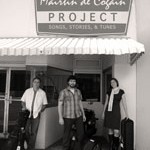 The Máirtín de Cógáin Project is a group lead by Cork Renaissance man Máirtín de Cógáin, who is an entertainer of unending talent. A crowned All-Ireland Storytelling Champion twice over, a noted singer, a dancer and a heart-beating bodhrán (Irish drum) player, and actor, Máirtín has gathered a stable of the finest Irish-Yank musicians around him to bring the story of Cork to the States.

The show is entitled ‘From Cork with Love’ and brings the unique view of romance from the south of Ireland. Ballads of love, friendship, betrayal and a love-often-overlooked are often overlooked when they are from one’s own city, and the Project burnishes them to their original luster, all the while time poking fun at either side of the adventure. The night will have a few dance tunes and a story or two from the Corkman himself.”

The MdC Project’s new CD, ‘From Cork with Love’, was released in December 2010. Members of the Project include Don Penzien and Valerie Plested, and Brian Miller and Norah Rendell.

In their own words, The Fuchsia Band “are a group of four lads from Cork, Ireland who play, dance, sing and generally have a good time like it (used to be) is in Ireland. We’re traditional Irish musicians with emphasis on fun and general entertainment!” They play traditional Irish dance music, sing songs, tell stories, and perform Irish dances. The band has three recordings on their docket, with one brewing in the pot.

Máirtín de Cógáin, fronting the band, is an All-Ireland winner in storytelling, and also sings, dances, and plays the bodhrán (Irish drum). Brian McGillicuddy is also an All-Ireland winner, playing the tenor banjo, mandolin, and tin whistle. McGillicuddy is nicknamed “Flash” for good reason! Eoin Verling on the button accordion comes from a musical family and has been playing since the age of 10 in his father’s céilí band. Mick Heffernan plays flute and guitar, adding the glue that binds the group together. Most of the band speaks the Irish (Irish Gaelic) language fluently. 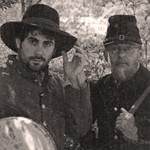 Captain Mackey’s Goatskin and Stringband is a new venture by Corkmen Jimmy Crowley and Máirtín de Cógáin. The band takes its name from the American-born Fenian, Captain Mackey, and a legendary Cork folk band from the sixties, Paddy’s Goatskin and Stringband, which had a seminal effect on Jimmy’s musical life. The Stringband’s membership is fleshed out by the addition of Irish fiddler Valerie Plested and guitarist Don Penzien for a mighty sound, indeed! Captain Mackey’s will be officially releasing their CD, Soldier Songs: The Irish Abroad and Soldiering, in late 2009.