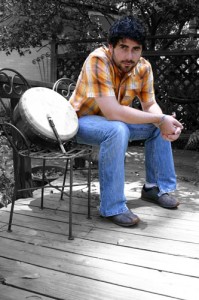 A drum and his boy

Máirtín de Cógáin is a singing, dancing, story-telling bodhrán player who also is a noted playwright and actor. He performs in his native Ireland and all over the U.S…. and between and beyond, too! An infectious personality, Máirtín pleasantly commands the attention of any collection of people, from a concert hall to an intimate porch.

Descended from a long line of storytellers and with two CCÉ All-Ireland’s for Storytelling under his belt, Máirtín gets no more joy out of life than the telling of stories.  If you are lucky enough to catch him spinning a few yarns, you are in for a treat.

When touring the globe with The Máirtín de Cógáin Project & The Fuchsia Band, Máirtín is also a true promoter of the Ballad. He is searching ever for those forgotten songs of old to give them new life, and also writes some of his own.  Máirtín learnt from many famous Irish singers such as Danni Maichi Ua Súilleabháin, Séamus Mac Mathúna, and Ciarán Dwyer. A fluent speaker of Irish (Gaelic), his love of the ‘Teanga na Gael‘ stems from his parents, who brought him up in a bilingual house and sent him to primary & secondary schools taught in the medium of Irish.  Máirtín then earned a Degree in the Irish language from University College Cork.

If not on stage singing, storytelling, dancing, or playing the bodhrán, Máirtín is threading the boards as an actor, most notably in the film The Wind that Shakes the Barley.  He has co-written many productions with the Be Your Own Banana Theatre Company, recently playing De Bogman off-broadway in NY.

Máirtín has been playing the bodhrán for a long many moons, learning first from Eric Cunningham (The New De Danann) and later from Colm Murphy (The Old De Danann). Máirtín has taught Bodhrán technique at the Catskills Irish Arts Week, August Irish Week as well as giving workshops at major US festivals including the Kansas City Irish Fest, CelticFest Mississippi, Minnesota Irish Fair, and La Crosse IrishFest.  He also gives private tutorials along the road while touring, be sure to inquire if you need a lesson.

Growing up in a house full of dancing, Máirtín could not but help teach the steps at the family run Céilís from an early age, and a gifted teacher of Cork’s folk dances he is.

Máirtín makes friends wherever he goes. In a very short time, Máirtín, the Fuchsia Band, and the “Project” have made themselves regulars at some of the most prestigious Irish festivals in the U.S. While now living in San Diego, California, he has taken up Snake Charming & Bird Watching. While not on the road and hopes one day for A Big Year!

Heard on the Street

“Máirtín is a superb entertainer and a fine gentleman.  He has been a delightful radio guest on Celtic Connections, and I found him to be a highly energetic and thoroughly enjoyable stage performer at our Southern Illinois Irish Festival.  Máirtín is where it’s happening!” – Bryan Kelso Crow, host of NPR’s Celtic Connections

“You should have kept the beard. Pretty cover all the same.” – Mother in law, January 2011

“Mairtin has really impressed me with his passion and knowledge of the Irish tradition; be it singing, inventive bodhrán playing or storytelling. The man has a natural, engaging way with people. Mairtin is set for great things! ” – Jimmy Crowley

“Cork’s Máirtín de Cógáin is a seanachie, and there ain’t many left. He is a wonderful, total entertainer. Bigtime new talent! “- Bill Margeson from www.LiveIreland.com

“Mairtin, you are the best thing going, the ‘genuine article’ as it were with understanding and passion. Like an old beer commercial from years age, ‘It just doesn’t get any better than this!’– Mike Mazur, Storyteller